Email us about this property.
Currency conversion?

Ready to live in 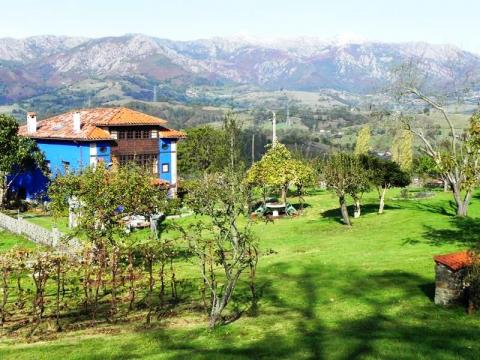 Large old Asturian country home, with separate guest cottage and other outbuildings, surrounded by gardens planned to bloom throughout the year, located on 1 ha (2.5 acres) estate bordered by stone wall and numerous mature trees, includes open grazing tracts, apple orchard and vineyard. Unique location on the slopes of Peak la Frecha, with breathtaking unobstructed views of the Sueve mountain range and the Piloña river valley to the North, the Aves range and Piloña mountains to the West, the Picos de Europa mountain range National Park to the East, and the Frecha peak proper to the South.

Easy access on regional road, on the edge of a quiet hamlet, the property offers an exceptional blend of proximity and privacy.

The main house has three floors, with a total 270 m2 (2900 sqft) serviceable surface; it features 6 bedrooms, 4 full baths, living-room with fireplace, half-bath, large open space with dining-room and modern kitchen with laundry. The front door leads to an enclosed entry hallway; there is also a large covered porch at the entrance to the grand kitchen-dining area.

The first floor offers a welcoming South-facing glass-enclosed gallery, plus 3 bedrooms with en suite bathrooms, accommodating a total six persons. The second floor features perhaps the most inviting room in the house: a glass-enclosed family-room/study with breathtaking views of the property, plus 3 bedrooms and one with a bathroom, accommodating a total seven persons.

The two-story guest cottage with a total 50m2 (540 sqft) usable area, is a detached apartment with expansive views of the Sueve range and the Piloña river valley. The open ground floor has full kitchen and washer, dining/living area can double as sleeping area. The first floor is a warm and spacious bedroom with a bathroom and dressing room. Total capacity is three-four persons.

Other buildings include a large open tile-roofed country kitchen, with hearth barbeque, cast-iron wood stove, running water and firewood storage. A few steps away stands the focal point of the garden and many family and social activities: an inviting old grapevine-shaded cast-iron pergola.

The property is currently identified as “El Texu” (Asturian for tejo, or yew tree) in reference to the hundred-year old yew standing guard at the entrance, proudly facing the Sueve range and the Piloña river valley. Traditionally, however, the core estate has been known, perhaps for hundreds of years, as La Torre (The Tower). Local tradition as well as historical references indicate that a tower rose in the area. Evidence has been found of Roman dwellings and other structures in the immediate areas surrounding the property, hence the origins of the name of the hamlet. It is most likely that the ancient tower is still standing in its original location, albeit camouflaged by the passing of time and the hand of man.

The main house traces its origin way back in time. The restoration work undertaken in 2004 clearly revealed the original part of the building: a square tower with architectural components, both in style and materials, consistent with those commonly used already in the XV and XVI centuries. The original structure was expanded to its present shape and size during the XIX century. The walls, up to 67cm (26”) thick, are built with stone from ancient local quarries, and most wooden elements -such as main load beams- are made of heavy hewn chestnut logs. Locally abundant chestnut was used throughout the house on doors, windows and floors. (All double-glass thermal-insulation windows installed during the renovation are solid chestnut.)

The cottage, also built of stone, was originally a barn, later used as storage and garage. Finally, it was reincarnated as the present guest house.

The kitchens, baths and all mechanical infrastructures are built entirely new using the highest quality materials and furnishings, designed to provide all the comfort and style expected in XXI century living. The furniture, decorations, tools and utensils displayed throughout are evocative of the atmosphere you would expect to find in a prosperous old rural family home, featuring valuable antiques of diverse origins: many from Asturias and other Spanish regions, as well as English, Continental and American. Some pieces date back to the XVIII century ranging to the more recent ones from the first third of the XX century. The art collection includes pieces by contemporary American and European artists as well as some very old pieces of uncertain date.

The estate and surroundings

Immediately around the main house and guest cottage there are extensive garden areas boasting numerous fragrant and colorful roses, as well as many varied flowering trees and bushes that fill the air with many colors and aromas throughout the four seasons. Also to be noted are numerous plantings of culinary and aromatic herbs, such as lavender, oregano, rosemary, thyme, sage and many others.

The rest of the estate is mostly open grassland appropriate to raise a few cows, horses or sheep, but most noticeably they offer a variety of unobstructed views to diversely breathtaking Asturian mountain and river landscapes. Several areas are devoted to growing some 50 cider apple trees with Asturias designation of origin; there is also a small vineyard with around 100 grapevines of superb native black grapes. Current production of cider and wine (approximately 100 bottles each per year) is strictly for family consumption, although the potential for commercial production is considerably higher. Other tree species present are chestnut, hazelnut, walnut, oak, yew and holly; there are fruit trees such as pear, cherry, plum, loquat, “piescos” (native peach), lemon and orange. Additionally, there is a small plantation of wild strawberries, raspberries, blackberries and blueberries.

Nearby surroundings offer countless opportunities to enjoy hiking, mountain biking, horseback riding, hunting, white-water fishing, mushroom foraging, canoeing, bird watching and every conceivable activity to enjoy Nature at its purest. Covadonga and the cities of Cangas de Onís (first capital of the emerging Spanish nation in the VIII century), Arriondas and Infiesto, with multiple tourist, cultural, gastronomic and entertainment offerings are ten to fifteen minutes away. Ribadesella and its beautiful beaches lie within half an hour. The sophisticated capital city of Oviedo and ebullient seaside Gijón are 35 and 45 minutes away respectively.